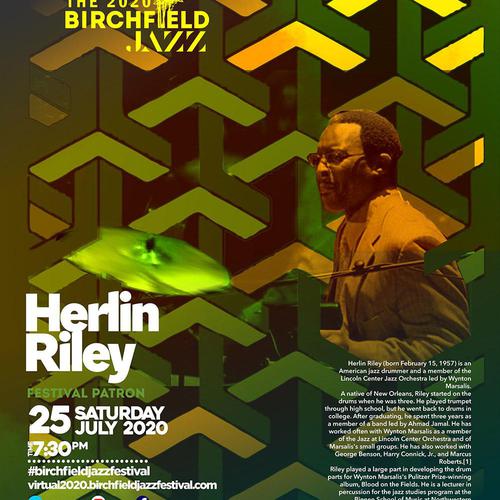 Herlin Riley was born on February 15, 1957, in New Orleans, Louisiana. Born into a musical family, Mr. Riley was always surrounded by music. He began playing the drums at age three. Mr. Riley studied trumpet throughout high school and two years of college. His attraction to the trumpet was short-lived, however, and he concentrated his efforts on the drums.

Mr. Riley was a member of Ahmad Jamal's group from 1984 through 1987. He has recorded with Marcus Roberts, Dr. John, Harry Connick, Jr., George Benson, Benny Wallace, Mark Whitfield, among others. His theater experience includes playing in One Mo' Time and Satchmo: America's Musical Legend.

In the spring of 1988, he joined Wynton Marsalis' touring and recording group, which he performed with through its disbanding in late 1994. He also performed on the first Lincoln Center Jazz Orchestra United States tour in the fall of 1992, performing the music of Duke Ellington.

Herlin Riley is a regularly featured musician at Jazz at Lincoln Center.