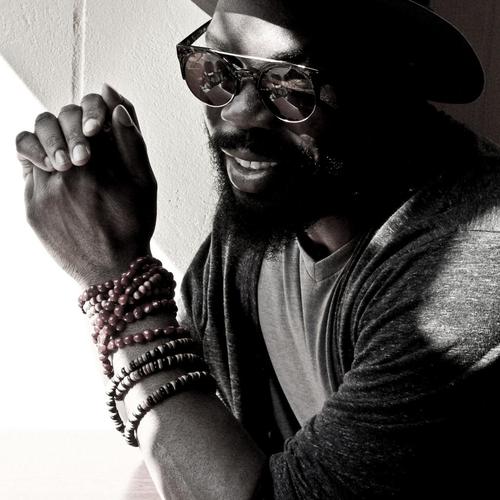 American born Lagos Nigeria bred singer-songwriter KUKU bridges the gap between his Yoruba roots and the western world. His haunting, rootsy sounds and conscious songwriting is often mentioned in context with some of his diverse influences such as Terry Callier, Fela Kuti, … Following years of odd jobs, serving in the United States Army, and attaining his university degree, KUKU launched his music career in the early 2000s with a series of independent releases, Love Sessions EP (2005), Unexpected Pleasures (2006), and The Absence of Cool (2007), and Love in a Time of Hope & Recession (2009). He toured in the US college and university scene, coffee houses, and busked extensively on street corners notably the Alexandria, Virginia boardwalk.

In 2013 he relocated to Paris France where released his 4th and what he deems his coming of age album, Soldier of Peace (Balogun ÌRÒRÙN) to critically acclaim. Songs like “The Cure”, “Yoruba Girl”, and “Live life Now’ garnered substantial spots in the French RFI, Radio Nova, and France Inter radio playlist.

Also in 2013, he lent his voice to the ORANGE™ sponsored advert for the African Cup of Nations singing the legendary Liverpool Football Club anthem ‘You’ll Never Walk Alone’. His collaboration with Congolese/Belgian rapper Baloji on a reprise of Fela Kuti’s ‘Buy Africa’ was the leading track on the 2013 ‘RED HOT + FELA’ album released by Knitting Factory Records. He collaborated on Afrobeat drummer and pioneer Tony Allen’s 2015 album ‘Film of LIfe’. Also in 2015, KUKU followed suit with his 5th studio album 'Ballads & Blasphemy: The Areligious Gospel of Adebola Kuku’ released by French World Music label  Buda Musiques. The album earned critical acclaim with the French, UK, and US musical press; Telerama Magazine, Le Monde newspaper, UK’s Songlines magazine, RFI radio, and France-inter radio. In recent times, KUKU continues to collaborate with producers such as EDM notable Charles Schillings and Monsieur Scott. 'KUKU REVISITED’ (2015), 'Where Are You ?’ (2016), 'Whatever Makes You Happy’ (2017), and 'WHO TAUGHT YOU? [Monsieur Scott RMX] (2018), are recent releases from such collaboration.

KUKU continues to share is musical medicine wherever he finds pleasing, be that busking on a city street, playing in bars, private concerts, or concert halls, or lending his voice to publicity campaigns, collaborating with like-minded artists, or preparing for the release of his 6 studio album 'ARIYO [A Sight to Rejoice]’ which will be available on March 27, 2020, in association with Radio Krimi - Record.