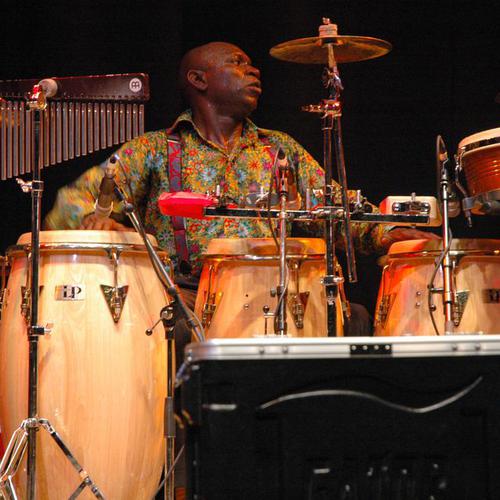 ‘Nigerian, Lekan Babalola, is one of the most extraordinary percussionists in world music and jazz today,’ -Nick Gold, World Circuit.

Lekan has worked with many prestigious names in the music industry.  Awarded his first Grammy in 2006 for performances on the late Ali Farka Toure’s album ‘In the Heart of the Moon’, he was awarded a second at the 49th Grammy awards only this month for his work on the American jazz diva Cassandra Wilson’s album ‘Loverly’. World press has given him rave reviews for his percussive ‘wizardry’ and infectious grooves.

Lekan started his career playing in the Yoruba Christian Church owned by his father. As custodians of Yoruba tradition his family taught him first hand Yoruba art and culture and this has influenced all his work .He also received a cultural and political apprenticeship from the late Fela Kuti.  In 1980 he came to Britain and as his skills as a master percussionist grew was invited to join Gasper Lawal in 1982. He continued his career where he performed with the likes of Ernest Ranglin, Branford Marsalis, Cassandra Wilson. Also performed with African Jazz All Stars, Roy Ayers, Kate Luxmoore Group, Tony Allen, KLLB Band, Axelle Red, Pinse Saul, Queen Salawa Abeni, Jean Toussaint, David Byrne with the music of William Onyeabor, under the Luaka Bop Record label. Most recently he played on Tony Allen and Hugh Masekela’s recording, released in 2020.

He has developed his band Sacred Funk and will be releasing an album this year through Temple Record Company.